The main purpose of the Open Finland event was to showcase different open data projects and to encourage civil servants to open up their contents. Open knowledge is clearly valued by the Finnish government, demonstrated by the fact that the event was organised by the Prime Minister’s Office. PM Alexander Stubb was also present and gave the opening speech at the event.

What can Wikimedia offer to public sector organisations? Wikimedia does open knowledge on a practical level. Wikimedia projects Wikipedia and the media file repository Commons are already well-known international and multilingual platforms. With these platforms cultural heritage organisations and government offices can open up and link their own data. Wikimedia is non-profit and its pages are ad-free. This autumn Wikimedia Finland organises Wikipedia education together with Finnish cultural heritage institutions.

Wikidata is a new way to open machine-readable structured data for free use. Wikidata is becoming a comprehensive linked database that includes data used by Wikipedia and other Wikimedia projects. For civil servants and researchers it would be useful to use Wikidata as a reference tool. It will be utilised for example in the British ContentMine project that uses machines to mine and liberate facts from scientific literature. This autumn Wikimedia Finland will organise a Wikidata workshop. If you are interested, please sign up here!

Historical maps are an excellent example how governmental and cultural heritage institutions can partner with non-profit organisations. Wikimaps is an initiative by Wikimedia Finland to gather old maps in Wikimedia Commons, place them in world coordinates with the help of Wikimedia volunteers and start using them in different ways. The project brings together and further develops tools for the discovery of old maps and information about places through history. At the Open Finland event Wikimedia was not the only participating organisation that is dealing with old maps. For example Helsinki Region Infoshare and the National Land Survey of Finland have a wealth of historical maps and other geospatial open data, and some of them have already been published online free of charge. 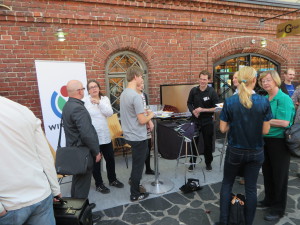 At the event there was a clear desire that digitalisation and opening up government data would lead to new kind of entrepreneurship and thus to economic growth. Indeed there were interesting product launches, such as Nearhood which brings together news and other information related to a specific neighbourhood, or the environmental data project Envibase by the Ministry of the Environment.

Demonstrating the societal value of open data has been somewhat difficult. This is especially common in cultural heritage projects where in many cases there are no tangible financial benefits. Beth Noveck, one of the event’s keynote speakers, emphasised the need to search for evidence about the societal and financial value of open data. So far the arguments supporting open data have been too heavily based on faith, not evidence. Noveck displayed many projects in the UK and in the United States. Perhaps these examples could offer good ideas to circulate in Finland too.

Personal data was one of the key topics during the event. The MyData panelists pondered about the citizens’ possibilities and limitations to use data about themselves. Open Knowledge Finland has also published a report about the topic. Personal data is an interesting topic that raises differing opinions. On the one hand the public opinion is clearly in favour of individuals’ right to control data about themselves. On the other hand for example the Wikimedia Foundation has clearly criticised the recent “right to be forgotten” European Union legislation because it can lead to censorship that distorts online source material.

Wikimedia Finland would like to thank Samsung for lending us IT equipment for exhibition use.